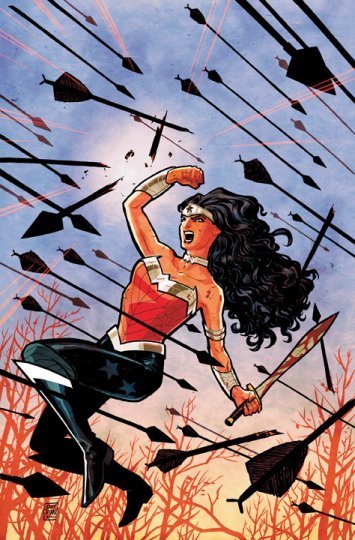 Around this time DC made the shocking announcement that it would be effectively “re-booting” the entire DC Universe with every single title re-starting at #1 with all new and fresh interpretations and origins of its core characters. And in one stroke the Odyssey story arc all became rather pointless, after Phil Hester made it clear on message boards that the arc was completely self contained and its payoff was not linked in anyway to the Flashpoint crossover event that would wreak the drastic changes to the DC Universe. After much hype and continuous reassurances from DC that Straczynski’s opus had a grand master plan – and that while many fans may not have liked how the arc started, they would absolutely love how it ended – it became apparent that whatever the finale brought us – it would all count for nothing and effectively be wiped clean by the re-boot. Apart from, it seemed, the controversial new Jim Lee costume of course.

Many fans were furious at these turn of events. The campaign in 2010 to have the title renumbered had all been for nothing. And, while fans of other characters had at least had the past year to enjoy the current incarnation of their beloved characters before seeing them “re-imagined” as part of the upcoming re-vamp, Wonder Woman fans were denied even that opportunity, having to endure a year long story line featuring a largely unrecognisable version of Diana in both appearance and characterisation.

As to the events in this issue, we step ever closer to the “big reveal” as to who the main villain of the piece is – and there is just a hint that she may in fact be Wonder Woman herself. Once more, we see a largely unrecognisable version of Wonder Woman – ineffective and selfishly crying while behind her, the Amazon sisters who have fought by her side suffer horrible deaths in a continuation of the extreme “violent death” theme so prevalent in this arc.

Anann and Bellona have captured Doctor Psycho, suppressing his powers of persuasion and torturing him to reveal the whereabouts of Diana. Although he unable to free himself from the powerful Goddesses, he enjoys asking why they are unable to find the Amazon Princess when they so easily found him? He is told that although they have ears and eyes everywhere, it seems that after Artemis had tracked Diana down to the hospital the Fates had woven a new strand that had meant their quarry dropping off the radar.

As they once again demand to know where she is hiding, Psycho laughs and tells Anann and Bellona that he had taken Diana to the hospital in order heal herself – body and spirit. As a result she now knew everything – including their roles in the deaths of so many of her sisters, her mother, as well as the destruction of her homeland. “She’s not hiding from you at all” he gloats. “She’s hunting you!” At that moment the stunned Goddesses hear a commotion outside the building. Diana is already here!

Outside, Diana leads Artemis, Giganta and Cheetah as they battle through the guards, trying to avoid further bloodshed if at all possible. Giganta pounds the ground with such force that the resulting shockwave bowls over their attackers leaving the way clear into the apartment.

Back inside meanwhile, Anann and Bellona bow before a huge golden door across which appears to be the famous =W= symbol of Wonder Woman. The doors open slowly to reveal a shadowy but almost familiar figure inside.

Their mistress is angered that the Morrigan have failed again and the two women plead with the “Flashing Blade” that their quarry is like nothing they have ever encountered. The more blows they strike at her the more powerful and determined she seems to become. They beg for just one more chance to turn Diana to their cause and to make her the third of their trinity. Their mistress agrees, adding that this is they’re final chance to either become three again – or none. The door closes on her again.

Suddenly the apartment door bursts open and the four Amazons charge in. As Artemis takes the lead though, ordering them to split into two to take on each Morrigan, Diana becomes transfixed with the emblem on the golden doors. She walks towards it almost trance like saying “That symbol. What does it mean?”

Using this distraction to their advantage, the two Morrigan use their magic to take away the powers they had bestowed upon Artemis, Giganta and Cheetah. Undaunted however, Artemis declares that as Amazon they don’t need powers to defeat their enemies.

Giganta raises her battle axe and charges at Bellona as the Goddess raises her own flaming sword to defend herself. She incinerates Giganta but not before the brave Amazon has plunged her axe into Bellona’s chest.

Cheetah cries out for her fallen sister but Artemis orders her to focus on avenging Giganta as they advance upon Anann. Meanwhile Diana has stepped right up to the door still transfixed. It opens very slightly to emit a blinding light. Diana is distracted and does not see the sword blade which plunges into her. Her eyes open wide in shock and pain. “Diana!” a horrified Artemis cries out, but Diana is still lost in her vision…

Meanwhile the severely wounded Bellona has crawled out into the hallway. she is met by Ajax, who has a smiling Doctor Psycho sitting on his lofty shoulder. Ajax looks down on the stunned Goddess and tells her that Psycho had freed him from her thrall and in return he had then freed that dwarf. He then draws his sword and asks if she would like to spar again.

Anann hears Bellona’s death scream and enraged that the Morrigan are now down to one, unleashes her full fury on the two attacking Amazons, knocking them to the ground. She tells them that they will now endure the flaming song of death to determine if either are worthy to become replacement Morrigan. She first blasts Cheetah whose body instantly incinerates!

As Artemis tries to crawl away “She was not worthy” states Anann. An enraged Artemis gets to her feet and sword raised, charges at her hated foe but she too is consumer in the deadly song of death.

While all this is occurring meanwhile, Diana is seeing a potential vision of her future in which she has joined the Morrigan and is leading an army of the un-dead across the face of the Earth. Nearly all of the planet’s heroes have been killed in her wake and her power seems unstoppable.

As she advances she is suddenly attacked by Superman however, who tries to reason with her to snap out of it. As they fight each other she tells him how he had brought this upon himself. He had given the world over to her and swelled the ranks of her un-dead army. He had let wars rage freely. Her army consisted of the countless victims of tyrants he had allowed to rule – in fear of becoming one himself.

As he tries to reason that it’s not that simple she continues that he had refused to hold the reigns of war so they fell slack. And war ran wild. War choked the afterlife with the souls of the dead and the Earth now belongs to them. With that, she kills him with her magic infused sword crying “This is not a war…it’s a homecoming.”

Shocked by what she sees in her vision, tears roll down Diana’s face as she at last manages to push herself away from the door and her impalement. As she falls to the floor bleeding, Anann stands over her, realising Diana has seen a glimpse of her destiny.

She tells the weakened Amazon Princess that while her Amazon sisters had proven unworthy of the Song of Death, she hopes that Diana will prove more worthy. With that, Anann opens her mouth and unleashes the fiery green discharge, as a struggling Diana tries to desperately crawl away…