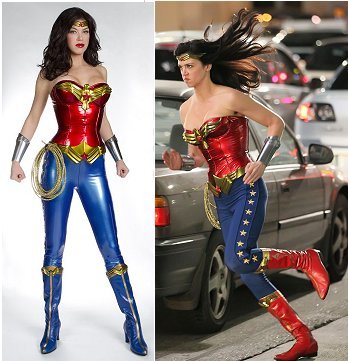 Continuing this arc’s rather bloodthirsty tone, more of Diana’s sisters get slaughtered leaving her to face off against the three Amazons tasked with taking her down – and in the process she finds herself rather outclassed! This is presumably due to this version of Diana supposedly being a younger, more naive version of the Amazon Princess, because the speed and ease in which she is taken down is somewhat out of character based on the Wonder Woman we are so used to – and who can go toe to toe with even the likes of Superman.

Again we have yet another set of artists on the book, but the plot does flow more coherently than previous issues. The release date for Issue 609 was also brought forward and went on sale only a couple of weeks after this issue came out, in order for DC to hit their original intended date for the “Odyssey” arc to reach its conclusion, having lost several weeks due to the upheaval caused by Straczynski’s abrupt departure.

Meanwhile further casting information was released for the proposed NBC Wonder Woman TV series, including Liz Hurley playing the villainess Veronica Cale. Also, the first image to hit the web showing Adrianne Palicki in her costume met with divided opinions, with some at least thankful it was not the full blown Jim Lee “Jacket and choker” version as currently featured in the comic, but disappointed to see that she was still saddled with a pair of pants. Indeed, it was not just Wonder Woman fans who were vocal on the subject – many mainstream commentators criticised the fact that the costume did not conform to the iconic version most members of the public fondly remembered as worn by Lynda Carter in the 70’s TV series -and questioned why the need to change from the basic design aesthetics?

Interestingly, the initial fan response to the image mainly criticised both the fact that she sported a pair of blue boots instead of her traditional red ones and also that the material used for the costume itself seemed rather too bright and shiny – and looked rather cheap and tacky! Subsequent images taken later on the set of the pilot episode showed that the colours had already been toned down and that Adrianne now wore a pair of red boots. Was this a sign that the TV executives were actually listening to fan criticism – or had the publicity agents merely been stoking the fires of controversy on purpose with misleading images to help further promote the already much talked about show? Only time would tell..

Arriving at the Amazon Hideout, Diana and the other amazons see the damage caused by Artemis, Giganta and Cheetah. As they survey the ruins Diana asks why nobody else in the street or indeed the emergency services have come to provide assistance and she is told that Galenthias had cast a spell that cloaked the Apartment block from view. To everyone else, the building looks completely intact. The persistence of the spell also indicates thankfully that their Priestess is still alive!

As they make their way further into the building seeing the scars of what was clearly a lethal battle, Diana wonders why there are no bodies? As they sift through the rubble in a desperate hope to find anybody alive, Diana thinks to herself that she must stay hopefully for the others sake – so that their faith in her will not be shattered against the horror all around them.

Suddenly Diana feels something familiar under a pile of bricks and removes her mother’s shield, apparently still intact. As she checks it over the others state that this is a good omen at last. Diana replies that omen or not, they need a plan as the Morrigan and their army are obviously targeting them. They could go to the next safe house but their enemy may already be one step ahead of them. “What do we do now?” But even as Diana speaks, unknown to her, Artemis, Giganta and Cheetah are swiftly dispatching Orithia and the remaining Amazons. And in reply to Diana’s unanswered question Artemis states “You run”.

Diana spins around to face them and sees her sisters lying butchered on the floor. “Not likely” she cries as she launches herself at Artemis, using the shield to slam the rogue Amazon against the wall. Artemis is impressed at her swiftness and skills and retaliates with a rock, but the Amazon Princess uses the shield once more to deflect the attack before raising it over Artemis, intent on staving her head in. But Artemis too is also quick and karate kicks Diana, sending her flying backwards into the opposite wall. As she attempts to get up again Cheetah joins the fray and forcefully slashes the Amazon Princess, sending her flying out of the main entrance and into the street. As Giganta then leaps towards her, axe raised, she launches herself into the sky.

Initially the three Amazons are taken aback by this development but Artemis quickly draws her bow and fires an arrow piercing Diana through her foot. In pain she comes crashing down into a nearby alleyway. As she removes the arrow, crying out in pain, she suddenly sees a vision of the Gods. Surprised, she asks what they are doing here and why now? She is told that her enemies wish to break her bones but that they must not succeed in breaking her spirit – for that is what will be their undoing. She brings to their attention sarcastically that they are doing a pretty good job of breaking her bones right now! They reply that the three rogue Amazons are not her enemy. They were once her fellow sisters, who are now lost souls yoked to an irresistible evil. Their power is great but it is fueled by hate alone. And it is meager compared to the source of her own power.

Weak from her injuries, she despairs that they killed all her people and she is now left alone. They reply that she has allies yet unseen. As they begin to fade she cries out that here are also three of them but they add that inside her is an innumerable host. But as they disappear from view she can see standing at the exit from the alleyway her three foes. Artemis ominously asks “Who are you crying to girl? The Gods? Save your prayers. We’re nowhere near the end of this yet…

Meanwhile at the apartment building belonging to the Morrigan, Bellona is using Ajax for some sparring practice. As she goads him he manages to slice her sword in two but she swiftly and brutally removes the sword that has been permanently lodged in his chest since the Trojan Wars, before kicking him to his knees. For a brief moment Ajax revels in the bliss of finally being free of his cursed talisman, but Bellona just as quickly thrusts the sword back into place!

Just then Anann enters and announces that Diana has been cornered. Changing into more modern day attire, the two War Goddesses climb into their chauffeur driven limo to take the short drive across town, but the driver seems to be unresponsive to their instructions and suddenly his face contorts into that of their dead fellow Goddess, Enyo!

Shocked, they listen transfixed as Enyo reminds them that even Gods can die – even the Morrigan. She also reminds them that as powerful as they are, they are still but servants of another…she of the flashing blade and unquenchable thirst whom has dictated all their moves to date. This victory over Diana belongs to their mistress and her alone. As such, they should not seek to replace the triumvirate with Diana, lest they be slain as their mistress had killed her. Enyo states that Diana must not become one of them. She must die like the rest of the Amazons…so that their mistress can unleash her wrath on all who live! With that, the distorted face disappears leaving the rather disoriented driver to wonder what has just happened to him! Unnerved by their encounter, the two Goddesses decide not to venture out tonight…

Back in the alleyway, Cheetah bounds catlike up the wall and gets behind Diana. She tells the Amazon princess there is nowhere for her to go. Again Diana is sent flying, rocketing out of the alleyway from the powerful punch and slamming into a parked car. Giganta lifts up a passing school bus and readies to hurl it at Diana, crying that as she had left them to the mercy of Patriarch’s world it is only fitting that she die by this world’s machinery! As the bus slides uncontrollably towards Diana she can see the terrified children on board and prays to her mother to protect them. She grabs the oncoming bus with her bare hands, trying to stop the careering vehicle, but she cannot gain traction and it slams her through a wall.

As Giganta drags the bus away from the ruined building Cheetah is sure that the Amazon Princess could not have survived, but is stunned to see that there is no body and that Diana has already fled. But her keen sense of smell soon picks up Diana’s scent and she tracks her down to a nearby passageway. Barely able to stand, Diana is no match as Cheetah uses her claws to slash her across her back. “I could tear your throat out at any time but this so much fun.” she purrs.

Collapsing to the floor bloodied, bruised and battered, she pleads with them that they have been deceived as they circle around her. But they are deaf to her reasoning and Giganta savagely kicks her in the stomach, sending her rolling in agony. An angry Artemis then clubs her around the head with her bow, snarling that they are the only true Amazons left. Only the brave Amazons died that day on Themyscira, while she and her other sisters fled and hid like mice in Man’s World.

As Diana finds herself sprawled on the floor against the wall, barely able to stay conscious and severely injured, Artemis raises her axe intent on finishing off the totally helpless and vulnerable Amazon Princess. But suddenly they hear a voice cry “Get away from her!” and turn to see a small, cloaked man standing there – the same figure previously seen gathering the dolls at the ruined temple. An annoyed Artemis to dispose of the intruder but as the Amazon charges at him he begins to concentrate and calmly says “You are too heavy to stand”. Instantly, she crashes down to the ground, pinned there as if held by gravity itself and unable to move.

He turns his attention to Cheetah and says” You, quick one, Chase down the moon for me”. Immediately she scampers off down the street, eyes peeled at the sky. Artemis draws her sword, warning that she will not be so easy to deal with, but as she swings her sword at him he calmly touches its tip and states “You’re lost.” She freezes on the spot, staring lost into space!

The figure then steps around her and kneels down beside the groggy Amazon Princess, seeing that she is not long for this world unless her wounds are attended to. Removing his hood he reaches for her as he reveals himself to be none other than Doctor Psycho!